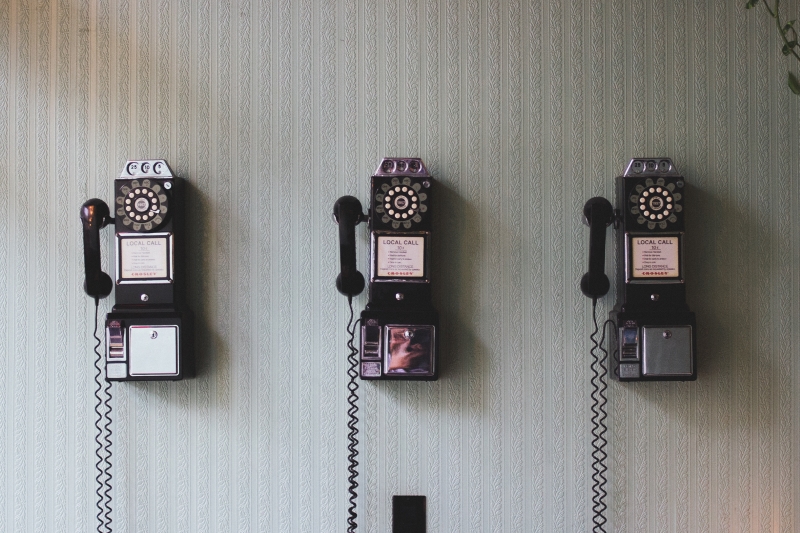 This is Part 1 in a series exploring short-form posting, the IndieWeb, and taking control of your own online social workflow for a statically-generated site:

I am thrilled to see more and more folks are moving to their blogs for posting short-form content, usually referred to as Notes. These are very brief blog posts, usually about the same length as a Tweet or Facebook update. Of course, as they do this, they inevitably start grappling with the question: “How do I make sure these notes are copied to Twitter?” And maybe also: “How do I make the process quick and seamless?”

I gave a talk a while back titled The Decentralized Social Web where I covered the general principles to make this work. This is part of a concept known as the IndieWeb. But I haven’t covered the specifics of how I set this up for my site. I am frequently asked about my notes and replies on Twitter, and have promised a write-up repeatedly. It’s taken me far too long, but this is that write-up.

Getting on the IndieWeb

If you’re the type of person who uses a static site generator (i.e. a developer or otherwise technically literate), you should be able to set this stuff up yourself. None of it is too complicated, but there several pieces to it.

Each piece on its own is fairly straightforward, and there is a sort of exponential return: the more of these pieces you put in place, the more they work together to give you a smooth workflow. Which is why I want to start by illustrating the final experience. I will avoid bogging this down with the how (that will come in the following posts) and will instead focus on what. I will get into the specifics in the rest of this post series.

If you already have a blog or website: Congratulations! You’re already on the IndieWeb. The rest is a series of enhancements you can make to add to that experience.

The magic in action

I write my notes using the Omnibear browser plugin (available for Chrome and Firefox). I type what I want to say, check the “syndicate to Twitter” box if I want it copied to Twitter as well, and click Post.

This adds the entry to my site, which usually publishes in around 45–60 seconds (the time it takes for Netlify to rebuild my site). After another minute or so, a copy of the note appears on Twitter, along with a link back to the original on my site. If people reply to the post on Twitter, those replies are automatically copied back to my site.

I can also reply to tweets. On twitter.com, I can right-click on a tweet and select “Reply to entry”.

This opens the Omnibear window and allows me to write my reply. 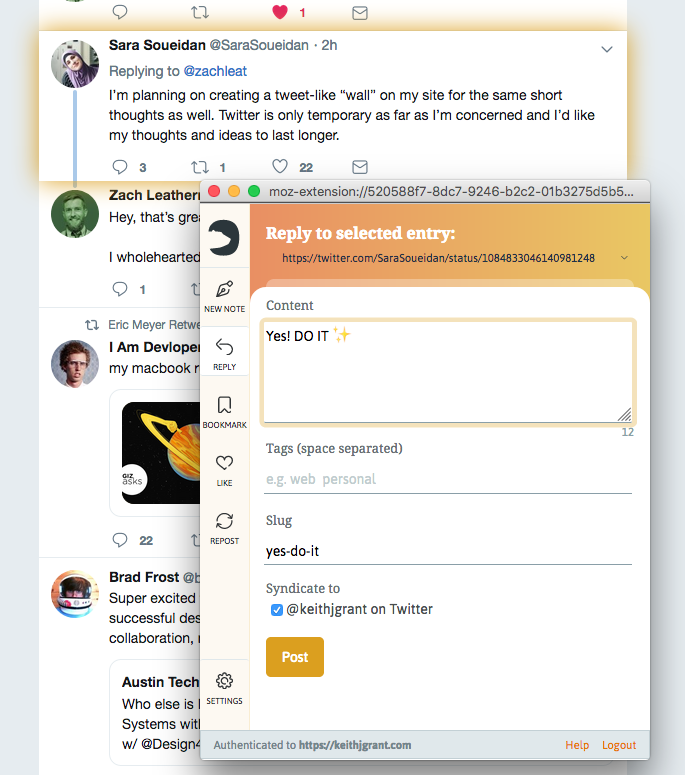 As before, this posts to my site. Shortly thereafter, the reply is copied to twitter.

Hopefully, this sort of workflow sounds appealing to you. If you want to know how to do this stuff, stay tuned.

A new type of web standards

When we developers talk about Web Standards, we tend to talk about the basic building blocks of web pages: HTML, CSS, JavaScript. But there are more standards beyond these languages. The W3C, in fact, has a Social Web Working Group. This group has published several standards.

Two key standards to be familiar with are Webmention and Micropub.

Webmention is a way to let another webpage know when you have linked to it. If you’re familiar with the old Pingback concept, this is similar, but greatly simplified. In the example above, I replied to a post on Twitter, but I can just as easily reply to a post on any site that supports Webmentions. If you write a note on your site, I can reply to it directly, without going through any third party service.

Micropub is a way to post directly to your site using a third party editor. In the example above, this editor is Omnibear, but it could just as easily be an app called Quill or another similar service.

The important thing to note here is that I haven’t rigged up a custom script to post to my site and copy to Twitter and crawl through twitter for replies. I am using open web standards. Most of the work is done by existing tools that understand these standards, not one-off code.

If I want, I can swap out Omnibear for a different editor, or change to a new Micropub server if I find an alternative I like better. Open standards drive it all, so nothing is proprietary. In the following posts, I will show you how I chose to configure each piece of the puzzle; but you can just as easily change one piece out to suit your needs, while still doing other parts of it just as I have.

In short: my process is not an all-or-nothing approach. I’ll show you what I use, and you are free to pick and choose from among the pieces. You can implement them one at a time at your own pace, or all at once. In the rest of this series, I’ll walk you through how to do it.