HTML 5.2 has introduced a new <dialog> element for native modal dialog boxes. At first glance, it seems fairly straightforward (and it is), but as I’ve been playing around with it, I’ve found it has some nice features that might be easy to miss.

I’ve embedded a full working demo at the end of this article, but if you want to check it out as you read along, you can see it here.

Here is the markup for a basic dialog box:

The open attribute means that the dialog is visible. Without it, the dialog is hidden until you use JavaScript to make it appear. Before any styling is added, the dialog renders as follows:

It’s absolutely positioned on the page, so it will appear in front of other content as you would expect, and is centered horizontally. By default, it’s as wide as the contents within.

JavaScript has a few methods and properties to make working with the <dialog> element easy. The two methods you will probably need the most are showModal() and close().

When you use showModal() to open the dialog, a backdrop is added to the page, blocking user interaction with the contents outside the modal. By default, this backdrop is fully transparent, but you can make it visible with CSS (more on that below).

Pressing Esc will close the dialog, and you can provide a close button to trigger the close() method.

There is a third method, show() that also make the modal appear but without the accompanying backdrop. The user will still be able to interact with elements that are visible outside the dialog box.

Right now, <dialog> behavior is only supported in Chrome. Firefox provides default styling, but the JavaScript API is only enabled behind a flag. I suspect Firefox will enable it by default soon.

Thankfully, there is a polyfill that provides both the JavaScript behavior and a stylesheet with default styling. Install dialog-polyfill in npm to use it—or use a regular old <script> tag. It works in IE9 and up.

When using the polyfill, each dialog on the page needs to be initialized:

This will not replace native behavior for browsers that have it.

Opening and closing a modal is nice, but it doesn’t look very professional at first. Adding styling is as simple as styling any other element. The backdrop can be styled with the new ::backdrop pseudo-element.

For older browsers using the polyfill, this pseudo-element selector will not work, however. In its place, the polyfill adds a .backdrop element immediately following the dialog. You can target it with CSS like this:

Add a little more markup to provide styling hooks. A common approach to dialog boxes is to break it up into a header, a body, and a footer:

Add some CSS to this, and you can make the modal look however you want: 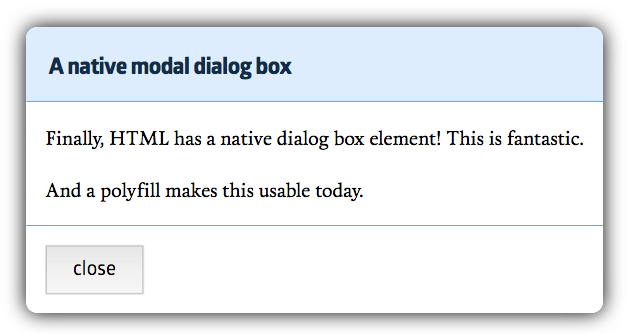 Often, we want some sort of user feedback from a dialog box. When closing a dialog, you can pass a string value to the close() method. This value is assigned to the returnValue property of the dialog DOM element, so it can be read later:

One thing that seems to be missing is the ability to close the modal when the backdrop is clicked, but there is a workaround. Clicking the backdrop fires a click event with the <dialog> as the event target. And if you construct the modal such that child elements fill the entire space of the dialog, those child elements will be the target of any clicks inside the dialog. This way, you can listen for clicks on the dialog, and close it when the dialog itself is the target of the click event:

This isn’t perfect, but it works. Please let me know if you find a better way to detect clicks on the backdrop.

I’ve worked a lot of stuff into the demo below. Play around with and see what else you can do with <dialog>. This includes the polyfill, so it should work in most browsers.